Renovation renders are used for the renovation of humid walls, which are particularly common in basements. The moisture causes efflorescence and salt crystallization, which can turn in structural damages. Both existing buildings and new buildings are affected. The reason for the efflorescence can be for example structural deficiencies or unsealed basement walls. Also a close distance to a shoreline with high salt concentration in the environment can cause problems with efflorescence. The renovation of those buildings needs at first a proper sealing of the leakage and a removal of the salt in the walls without generating further damages. One possibility is the usage of renovation renders or if no permanent render should be applied desalination compresses with Poraver®.

The problem of efflorescence is omnipresent in construction and can have many reasons and manifestations. Efflorescence occur on renders, pavements, cement blocks, bricks etc. Most commonly efflorescence is formed by carbonation of lime (Ca(OH)2) or salts (sodium chloride, sulfate or nitrate). These materials can be either part of the formulation, the hardening reaction or can be absorbed from the environment in combination with leakage. 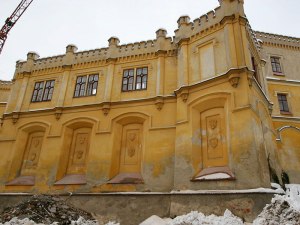 Picture 1a: Façade of a castle before renovation (© Satsys A. S.) 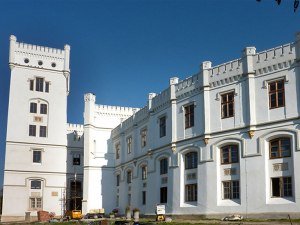 Picture 1b: Façade of a castle after renovation (© Satsys A. S.)

In addition to the optical problems on a render surface, such as the mentioned efflorescence or hygroscopic spots, the continuous crystallization of salt will lead to a delamination of paint, deposits and the gradual destruction of the render caused by the increased stress of the building material structure during frost (picture 1a).

In the cases of efflorescence caused by the carbonation of lime Ca(OH)2 the issue can be solved by adding pozzolanic co-binders or the usage of aluminate cements to catch or even not to form the portlandite. 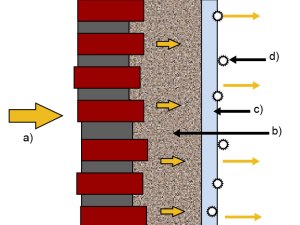 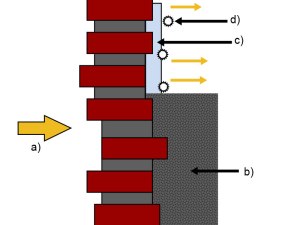 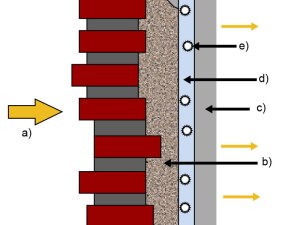 Efflorescence based on salt disposal in combination with a leakage (picture 2) need a different approach. A simple sealing with a water proofing layer (picture 3) of the wet area and renewal of the render is not suitable to solve the problem as water will just rise higher due to the capillary effect and the same damage will occur in the next level. The renovation of salt contaminated brick work/walls has to be done in 2 steps (picture 4):

Requirements and formulation of renovation renders

Mortar systems that support this out drying and crystallization are described in “WTA Merkblatt 2-9-04/D” in addition to EN 998 “Specification for mortar for masonry. Rendering and plastering mortar”. The special design of the render formulation will allow the water to evaporate easily and the salt will crystalize in the pore system of the renovation render without damaging the binder matrix. To achieve its special properties renovation renders have to fulfill the following requirements:

One challenge of the formulation is to achieve a high volume and stable pore system and a balanced hydrophobicity. The pores have to be stable during mixing and application but also need to be relatively large in size to stop the capillarity and to have enough space for the salt to crystallize. The salt and water should penetrate the render only a few mm. At this point the water vaporizes and the salt crystalizes in the pores without damaging the binder matrix. Typically pores in renders are “generated” by using air entraining agents. The disadvantage of air entraining agents is their dependency on mixing time and speed as well as their interaction with hydrophobic agents, especially at high air content levels. A possibility to stabilize the air content in renovation render is to use Poraver® expanded glass to reduce the density and to add a specific pore geometry.

In a research we wanted to find out if Poraver® granules are able to store salt crystals. In this case they would not only stabilize the render due to the low density but also function as a source for reliable and stable pores in this systems supporting the pores formed by air entraining agents. Prisms of the materials were prepared and infiltrated with salt according to “WTA Merkblatt 2-9-04/D” for renovation mortar systems (picture 5). From those prisms small samples were cut approx. 0.5 cm below the surface with efflorescence (picture 6). The samples were freed from dust by means of compressed air and sputtered with gold. 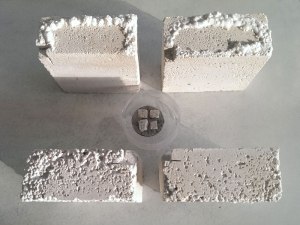 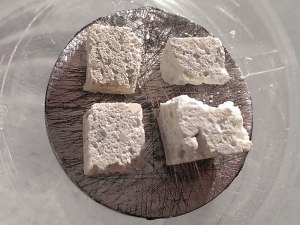 SEM (scanning electron microscope) pictures of different areas were prepared and the chemical composition at different points are determined by EDX (energy dispersive X-ray spectroscopy) measurements. As typical and expected for renovation renders crystals of salt were found in the air pores. An example of a sodium chloride crystals is shown in pictures 7 and 8. The EDX measurement for these crystals shows high peaks for sodium and chlorine (picture 9).

In the following investigations additional SEM pictures of areas with Poraver® grains are taken. Those pictures show particles inside the pores of Poraver® (picture 10 and 11). As the samples were cleaned by compressed air before sputtering the presents of those particles cannot be explained by sample preparation and cutting. Similar to the measurements for the particles in the air pores, EDX measurements of this areas are prepared. EDX diagrams show in addition to the peaks formed by Poraver® (Al, Si, Mg, O, Na) also a strong peak of chlorine and an increased peak for sodium (picture 12). At another area sulfur from Na2SO4 could be detected (picture 13 and 14). So crystals of both salts (NaCl and Na2SO4) that were used for the infiltration could be detected inside the Poraver® granules. 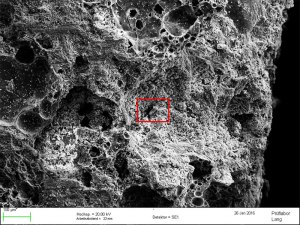 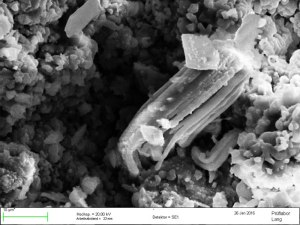 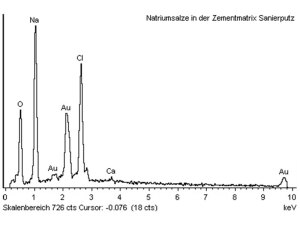 Picture 9: EDX measurement of the salt crystal from picture 8, showing it is NaCl.

Picture 10: Overview of particles within pores in Poraver®. 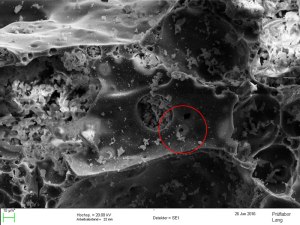 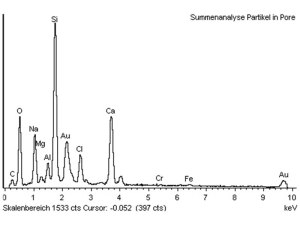 Picture 12: EDX measurement of the particles in Poraver (picture 11). In addition to typical peaks for Poraver (Si, O, Na, Al, Mg), sodium is higher than usual and chlorine (Cl) can be found.

Picture 13: 3,700-magnification of another pore inside Poraver®. In this case S from Na2SO4 could be detected.

Salt cannot only crystallize in air pores of a renovation render but also in the pores of a lightweight aggregate if the pore diameter is big enough and the pore system is open to the surface. Poraver® does not only stabilize the air pores inside the render by reducing the density but also act as active pore volume that allows salt to crystallize without damaging the render. The main advantage of the stable Poraver® pore volume is, that it is independent from mixing time and application. This way Poraver® supports a hassle-free formulation for that kind of renders and a stable and proven product quality not relying on “perfect” job-site conditions.

Request our non-committal renovation render guide formulation with Poraver®. Just simply fill in the following form. We will promptly send you the information by email. Please fill in the required fields marked with * for faster processing. Many thanks. 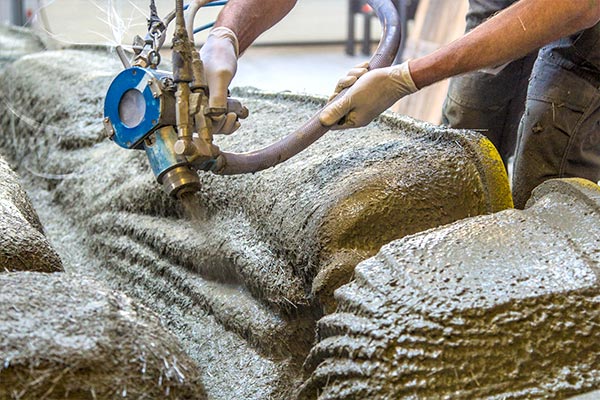 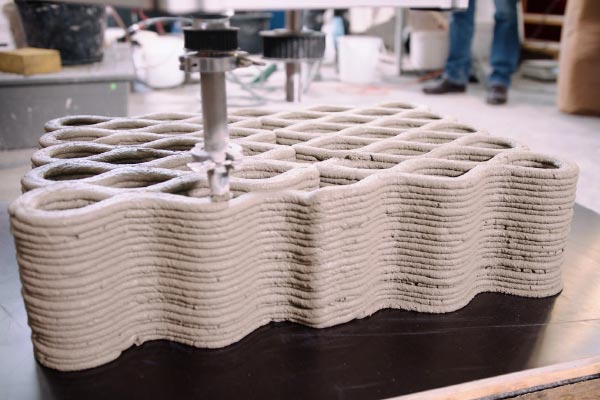